Hands Across the Sand is a nonprofit, founded in 2010 after the BP oil disaster, that has grown over the years to be an international movement.  Events are organized worldwide for people to come together and join hands as a virtual barrier against oil spills and other dirty energy methods that have negative effects on our ecosystem.  The coalition brings together businesses, activists and people worldwide to promote clean energy and protest against President Obama’s Climate Action Plan.

The Plan wishes to open up the east coast to oil and gas exploration with the eventual objective of drilling off the Delaware to Florida beaches.  The group is asking the President to protect our communities by rejecting these types of projects that extract and use fossil fuels.  Instead of threatening our environments and well-being, Hands Across the Sand would like for us to switch to renewable energy sources instead.

Local activists and supporters showed up to Folly Beach on May 17th at noon with Folly Beach Mayor Tim Goodwin holding a press conference.  Bikers, walkers and many locals joined hands at noon to show their support and stretched along the beach as far as they could to project their mission.   Some people were holding signs in protest of the Climate Action Plan.  Overall, the event was a huge success, and people dissipated by 12:15 to enjoy the lovely beach on the edge of America. 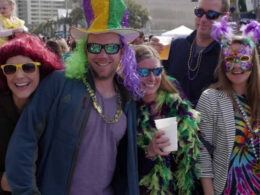