Some people think the only way they will ever find a shark’s tooth is to climb into a shark’s mouth, but there are much easier and less dangerous ways that will benefit both the tooth-seeker and the shark. For your greatest chance at success you need to know when and where to find shark’s teeth and how to identify them. Low tide is always the best time to find shark’s teeth on Folly Beach. Search the shoreline just after the tide has gone out when shells and debris have been deposited. This wet sand is one of the best places to find shark’s teeth, although there are times when a find is quickly yanked away by the surf before a tooth-seeker can grab hold of it.

Early morning is the optimal point in the day to embark on your tooth hunting mission since there will be fewer people on the beach; and if you can swing an a.m. weekday even better. Another good time to find shark’s teeth is after storms, as the inclement weather brings more debris to shore and shifts around the sand, which may expose more teeth. Although the ‘where’ can fluctuate based on a number of variables, a few shark hunters have posted to online forums that they struck shark tooth gold south of the Folly Beach Pier between the rock piles and halfway between the dunes and the water.

For the novice shark’s tooth finder, unearthing a tooth from the shell-covered sand might seem like an impossibility, but the trick is to know what to look for. One of the best ways to identify shark’s teeth is to look for certain angles and shapes in the sand. The fossilized teeth are jet black and triangular, and have an almost polished look to them. When the sun hits them just right they gleam in the sand. You’ll experience your share of disappointment as you uncover broken shells and the occasional bottle instead of a tooth, but it is good practice for a beginner.

If a find does appear to be a tooth, check to see if it is breakable. Like human teeth, fossilized shark’s teeth are incredibly durable (unless pulverized by a hammer or other blunt instrument). If the object isn’t easily breakable, resembles the triangular teeth of a shark and has a thickened base, then the find was most likely a success. Sometimes just scanning the surface of the sand isn’t going to reveal a tooth, so you can always bring tools like a shovel, trowel or bucket to scoop up the sand, and a colander or strainer to sift through sediments along the waterline.

The teeth on Folly come from a variety of different sharks including sand tiger, lemon, bull, tiger and reef sharks. Consult our shark teeth identification guide to determine the species. Teeth on Folly Beach range in size from that of a fingernail to the length of an adult finger. However, in some areas, much larger teeth can occasionally be found, such as that of the prehistoric Megalodon (whose name means “giant tooth”), an extinct shark that inhabited the oceans millions of years ago.

Just remember to be patient because much like viewing wildlife, hunting shark’s teeth requires perseverance. If you still come up empty-handed, one good way to practice is to buy a tooth from a souvenir shop and place it in the sand. This provides tooth-seekers with an eye for what the teeth look like in the sand and it becomes easy to spot them.

But if that method fails as well, then pocket the purchased souvenir tooth and pass it off as an authentic find. Nobody will know the difference. 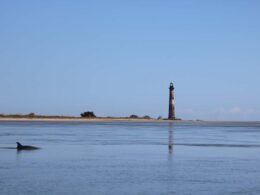