Floating Fun on the Folly River

Is your Saturday in need of some excitement, Folly style? The 2012 Folly Float Frenzy might be right up your alley . . . er . . . waterway.

The annual event encourages entrants to build their own floating rafts out of any materials. But the makeshift floats must hold at least three riders and be able to floatnot paddle or motor or power, just floatthe course on the Folly River between the Folly Boat Landing and Sunset Cay Marina. In fact, the rules for this years Folly Float Frenzy are very clear: No entry can be powered or self-propelled. All use of poles, paddlewheels, sails, propellers, flippers, etc. or any combination there of is prohibited. And Oars and paddles are allowed for navigation. This is not a race.

But its not the idea of a fast and hurried scramble for the finish that draws participants anyway. Its the one-of-a-kind event and all-day, relaxed, and totally Folly atmosphere that draws participants. Entered floats are decorated for event contests, and their captains and crew come prepared with coolers, sunscreen, and sometimes pasta. (Another rule reads: Mechanical devices or tubing shall be used to propel water balloons, spaghetti, snowballs, or any other benign objects.)

Theres still time if you want to participate in the 2012 Folly Float Frenzy. Check out http://www.sunsetcay.com/2012_Float_Frenzy.html for all the rules, details, and entry forms. Or if you just want to watch, put-in is at 9 a.m. on Saturday, September 29. Floating starts at 11 a.m. (if conditions allow) and will follow the Folly Rivers currents to the Sunset Cay Marina, where a party with music, food, and drinks will end the day. Awards will be given for the Most Seaworthy, Lest Extravagant/Simplest, and Coolest Design. And the grand prize, the Leg Lamp Trophy, will be awarded for the Most Follified design. Of course, the entry has to float the length of the course before it can be judged.

Proceeds from the 2012 Folly Float Frenzy will benefit the Folly Relief Fund.

Folly Boat is an Icon on the Edge of America

More to Surfing Folly Than the Washout 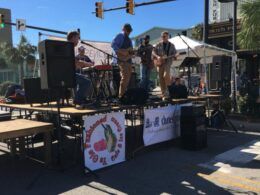 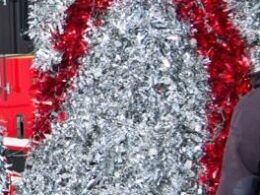